In this review, we'll be discussing the Magicard 300, one of the newest printers from Magicard. The Magicard 300 is designed to give small to medium sized businesses the ability to take advantage of Magicard's top of the line security features, with reliably efficient printing speeds. You'll have full control over the entire printing process with the Magicard 300's color dye sublimation, monochrome thermal printing, and rewritable technology print modes. Cards printed with the Magicard 300 are vibrant and printed at 300x300 dpi, so your photos and graphic design elements will stay crystal clear and appear exactly how they do on your computer screen.

This printer is one of our favorite recommendations for those concerned with privacy. Thanks to the standard inclusion of safety features like HoloKote visual security and digital shredding, you can be sure your data is kept safe. We also love the versatility of the Magicard 300: it has a number of optional upgrades that can be chosen at point of purchase or throughout the lifespan of the printer. Design your own personalized safety logo with a custom HoloKote design, and add even more data into your cards using magnetic stripe cards or smart card encoding.

The Magicard 300 is a durable and robust ID card printer that can offer a secure and reliable solution for your printing needs. It is ideal for use in schools, colleges, hospitals, and small to medium-sized businesses that require printing up to 10,000 ID cards per year. For a quick look at what makes the Magicard 300 different, check out the table below: 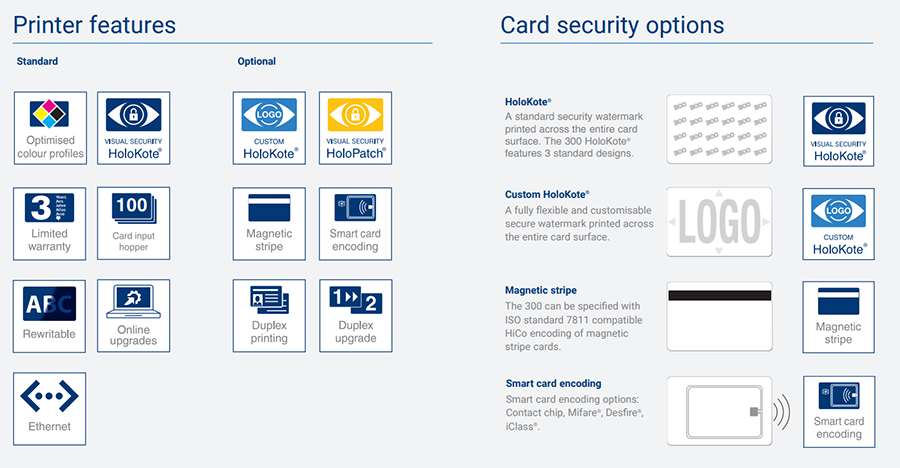 The Magicard 300 is simple to set up and easy to use. You can integrate a Magicard 300 with your existing network infrastructure quickly by using the USB connectivity option. This minimizes the set-up time and allows all users, regardless of their technical expertise, to use the ID card printer efficiently for their purposes. It comes with Ethernet connectivity as well, which makes it perfectly adaptable for any printing environment.

Magicard printers are known for their high-end output. The Magicard 300 does not disappoint in that aspect either; you can get vivid and colorful prints of up to 300 x 300 dpi resolution with the ID card printer. This makes it a great option for printing high-res photographs as well as more accurate detailing of the logos and barcodes on your ID cards.

The Magicard 300 printer comes in single-sided as well as dual-sided variants, and a single-sided Magicard 300 can easily be updated to operate as a dual-sided printer. It uses dye-sublimation printing technology and features a 100-card input hopper and a 70-card output hopper. The ID card printer also delivers a fast printing speed of up to 160 full-color single-sided cards per hour. Printing a single-sided monochrome card takes just around 6 seconds.

Just like all Magicard printers, the Magicard 300 printer comes with the unique HoloKote technology, which allows you to embed a watermark on the ID cards as they are printed. This makes the ID cards and badges more secure and tamper-proof. The printer has a few standard designs pre-loaded that you can choose for the watermarking or design your own watermark using the ID card printer software. 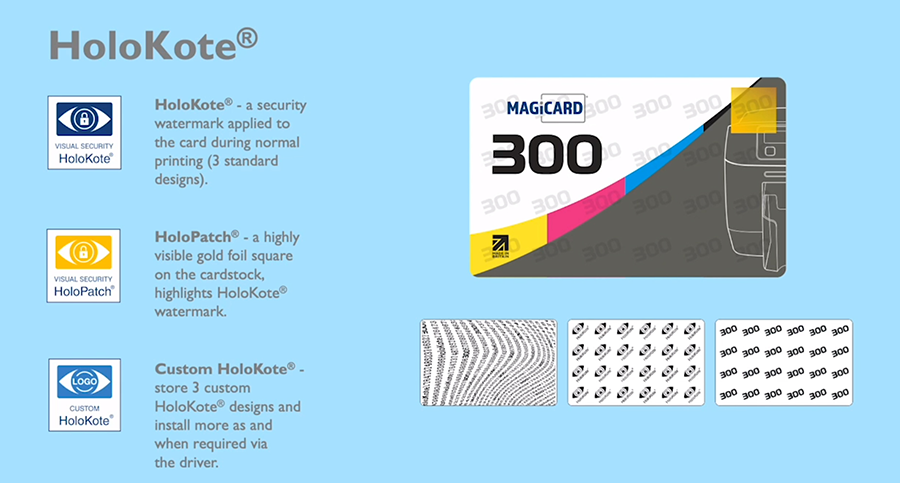 Another great security feature in Magicard 300 is its digital shredding feature, which fragments the data sent to the printer after each print job so that it cannot be recreated. This helps to protect the cardholder information and other sensitive data that you are printing. Moreover, you can also upgrade the Magicard 300 printer with encoding security options easily, such as magnetic stripe and smart card encoding.

The ID card printer is also equipped with a smart firmware that analyzes the colors sent to it by the driver against the ribbon type installed. This helps to minimize film wastage by printing the panels in the right sequence. 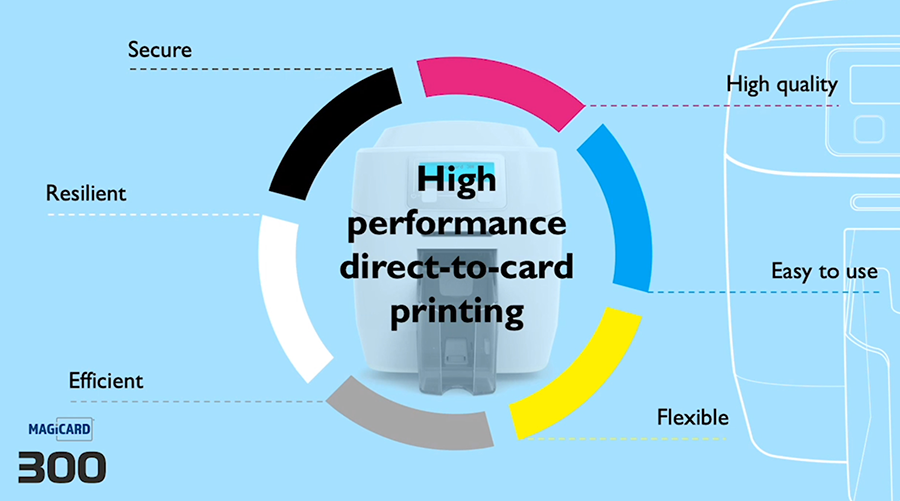