An In-Depth Review of the Magicard 600

An In-Depth Review of the Magicard 600

As of February 1st, 2019, Magicard has decided to start the new year with a bang by announcing the latest and greatest addition to the Magicard family of ID card printers, the Magicard 600. Lauded as being “the most secure printer available in the ID card printer market”, we decided to see for ourselves how the Magicard 600 stacked up against previous generations of Magicard’s signature ID card printers as well as the modern competition within the industry. At first glance, the Magicard 600 certainly does have a multitude of features that not only exceed what’s available on the market currently but introduces never before seen security technology that will surely evolve the industry for the foreseeable future. Security being the chief concern of this device, it delivers on that front among many other important capabilities. Other key features of the printer include Wi-Fi connectivity, fast print speeds, seamless integration, fine details, and secure processing of ID credentials.

The Magicard 600’s inception was actually brought about by an increase in security protocols and standards as a result the European Union’s newly passed GDPR requirements. The ‘General Data Protection Regulation’ applies to all individuals within the European Union and European Economic Area as a means of securing the export of personal data outside the EU and EEA areas, but the same protocols can be just as beneficial to entities existing outside of this range as well. Both small and large corporations in the US and abroad face the same risk of data malfeasance, and in that respect the Magicard 600 exists not only as the best option for cyber security, but one may hope as the new standard for data protection as a whole. The printer itself contains 3 security enhancing features found nowhere else on the market that make the device a true stand-out in the security protocol arena.

The first and most major innovation that Magicard has made to their new line of ID card printers is the addition of a digital shredding protocol. You may hear the term digital shredding and think of a shredder ripping apart a document containing sensitive material, and while that is a justifiable analogy, instead of a physical receptacle the ID card software destroys the data it used to write the encrypted security ID card. By doing so, the risk of the ID card printer becoming a repository for sensitive information that can be used by malicious parties to generate or re-encode already existing security cards. This new and exciting feature not only matches the criteria outlined by the EU’s new GDPR requirements, but it mitigates the risk of both digital hacking and social engineering tactics often utilized by malevolent individuals and criminal organizations.

Other important features that have a huge impact on the Magicard 600’s security capabilities include a threat benchmark tool that runs security scans against the National Vulnerabilities Database, and pushes regular updates to the device using Nessus Pro technology, the de-facto industry standard for vulnerability assessment. This third party software easily identifies and fixes vulnerabilities including software flaws, missing patches, malware, and misconfigurations across multiple platforms. Additionally the Magicard 600 comes bundled with a new trademarked feature called Holokote®, a smart watermark system that can be heavily customized and stacked for additional security. Up to 10 Holokote® watermarks can be loaded onto a machine at any given time and used for ID card printing simultaneously and in conjunction with one another. Custom anti-fraud Holokote® designs can also be received directly to the device via Magicard’s web tool. In instances where cardstock is being used for the ID cards themselves, Magicard offers an alternate technology called HoloPatch® which achieves the same effects as a Holokote® but instead uses a highly visible gold foil which highlights the Holokote® watermark.

This device is easily one of the quickest and simplest ID card printers to set up straight out of the box. It comes with a dongle for instances requiring Wi-Fi connectivity but is also compatible with USB 2.0 and Ethernet cables. It’s important to have the option between local and wireless connectivity as the device is designed to integrate with cloud data storage and must be able to receive regular security patches as well as online upgrades should the user choose to do so. Another advantageous aspect of online connectivity is the added option of Linux-based LYNK module integration that Magicard has developed specifically for third party developers should the organization choose to hire a third-party to create customizable software for the device. This not only expands the possibilities of the printer beyond what other ID card printers are capable of, but allows the user to truly customize their device to match the most demanding and complex of security protocols.

The Magicard 600’s connectivity features include support for WPA and WPA2 encrypted connections, depending on the host providing the encryption, thus increasing its security and cloud capabilities. On the whole, the printer is designed to integrate with existing network infrastructure without any modifications necessary, and supports a wireless connection with speeds up to 300Mbps. The device and dongle bundle are IEEE 802.11 b/g/n compliant and can integrate seamlessly with multiple-input multiple-output antennas. This means the connection operates on both 2.4GHz and 5GHz bands depending on the environmental conditions of this device. Compared with most of Magicard’s devices which are 10/100 Ethernet only, this is a welcome change and a big step forward for Magicard taking the lead as the industry standard.

The Magicard 600 is capable of printing 600x300 dpi using a resin-based process. This high quality print ratio and clear, vivid printing material allows the user to display small text at a higher quality than most printers. The wide color spectrum on offer using the CMYK cartridge system delivers vibrant and rich color output allowing for crystal clear representation of photos, logos, and icons, which are all essential to accurate printing, and in turn, increased security. Compared to the RioPro360, which uses 300x300dpi printing output and standard dye film, the Magicard 600 is a clear step above the previous generation utilizing premium dye film and an overall faster print speed. We tested the printing capabilities for ourselves and found that double sided printing was considerably faster on this device compared to prior models from Magicard , and the colour dye sublimation absolutely made an impact on vibrancy and readability. The monochrome thermal printing and rewritable technology is a must-have when your goal is high quality output with a quick turn-around time.

The card capacity features a sizeable 100 card feeder and 70 card stacker, adept at handling larger print loads but not quite as large as say the Fargo HDP5600. That said, the trade-off here is quality over quantity. It certainly holds true that sometimes the best things in life are absolutely worth waiting for. The stock options are varied when it comes to the Magicard 600, and is compatible with a wide selection of stock options such as blank white cards with a magnetic stripe, HoloPatch® blank white cards with a gold seal, HoloPatch® blank white cards with a gold seal and magnetic stripe, as well as the classic Magicard blank rewritable cards front & PVC back, as well as self-adhesive blank white cards. The ink selection is slightly less economical, however, with the high quality CMYK ink being used having an average lifespan of 300-200 cards. When you’re printing hundreds of ID card a week, the cost is sure to add up, especially if you’re fully utilizing the Magicard 600’s Holokote® technology.

Weighing in at a breezy 10 pounds, the Magicard 600 features a sleek and opulent exterior reminiscent of a designer car with the color palette of a high-tech wearable. The hard exterior shell can be customized with a number of custom color options falling under the theme of CMYK printing. From yellow, pink, and primary blue to subdued gray or black, through specialized dealers you can choose exactly which palette blends best to your interior environment. The addition of an extremely sleek cooling vent at the top is a nice textural and functional addition to the device, and serves as a reminder of the powerful computational power under the hood. The emblematic ‘600’ on the top plate of the printer is a nice subtle touch and the font used gives the printer an even more futuristic touch. All in all, from the appealing glowing blue display to the chunky tactile rubber buttons this printer is the pinnacle of modern ID card printer design, and far exceeds the expectations set by other contemporary competitors on the market. 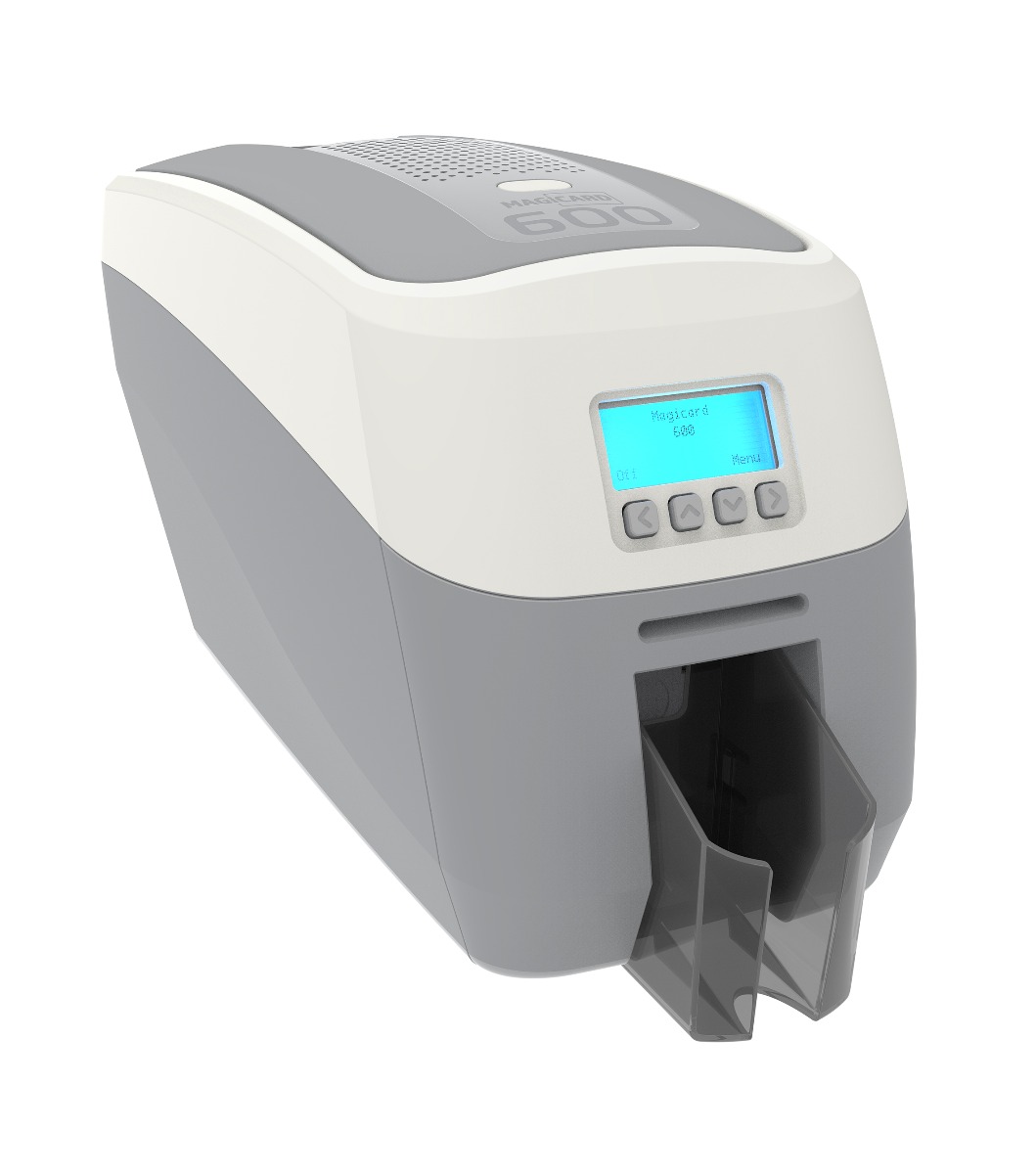 It’s clear that the Magicard 600 serves as the premium option in the world of ID card printers, but how practical is it to own and use a device that requires such high upkeep costs and who is the target demographic and market for this device? When it comes to education there’s a threshold for organizations that will find the Magicard 600 to be the ideal product; public institutions and organizations with budgetary constraints may not find this state of the art premium printer to be the most viable option, but on the other end of the spectrum esteemed university campuses and private institutions will find the printer to be invaluable in ensuring student, staff, and employee safety. The addition of the HoloKote® feature as well as the crisp and concise photo and font clarity will make the Magicard 600 an ideal choice for organizations looking to provide the most secure environment possible. Physical access would be an important consideration for all organization, and is the one area where this printer excels at the most. Organizations and institutions can find a duplicate use for cards as a form of on-campus payment for vendors and canteens. To reap the benefit of this feature, Magicard 600 fitted with an in-line EMV encoder is required.

Other organizations that will find a clear benefit in upgrading to the Magicard 600 are airport security organizations, government-based institutions, corporate organizations, and secure private –interest locations. With the addition of identity-based logical access points these institutions are able to protect their data and networks and monitor employee attendance and activity. This real-time tracking can be enhanced through the use of first-party software as well as third-party scripts that utilize the Linux-based LYNK module integration. These features vary depending on the printer model and encoding options, and range from no encoding, magnetic stripe, smart chip, smart contactless for tap integration, smart chip and contactless for dual-purpose cards, and the option of including all encoders including smart, mag, and contactless. In  addition you can decide your budgetary concerns by picking a single sided or double sided model of printer that will have a large bearing on your ink use and ease of card rewriting.

With infinite customizability options, this premium ID card printer is by far the best option for corporations and organization requiring the high demands as far as security, quantity, speed, and quality are concerned. Magicard is so confident in the quality and longevity of their product that they ensure each device up to 3 years, and go so far as to provide a replacement loan printer should your device malfunction, fail, or need a repair. They also guarantee the free replacement of damaged printheads and the entire printing device. Not only is this offer extremely generous compared to the competition, but Magicard also promises to cover the cost of all shipments to the customer. Not only is this one of the most selfless policies mandated by ID card distributors, but it adds to the value of the Magicard 600 and shows just how confident the company is in their new line. The security features packed within this immodest printer are unbeatable insofar that almost every competitor cannot compare with equivalent models. The Magicard 600 clearly sets a new standard in ID card security and encryption and in this reviewers’ opinion will change the industry for the foreseeable future.